Update: The competition is now over, but data is still being made available. These charts will update as long as this continues.

The following charts have been created with data scrapped from Apple's countdown page.

Note: Times listed in the source data and charts are given as UTC-0800 (PST, EST-0300), convert to your local time as appropriate.
Each chart also links to a larger, detailed version.

Robert Kosaro is also tracking the countdown at eagereyes. There, he makes the comment that it's not that the times are given as PDT, but are delayed by one hour. This seems much more likely and also explains why updates are frequently available before the start of the hour—I can't imagine why this didn't occur to me. I've updated each chart to properly label the times.

The source data is generated by running the following in a directory containing any data records. 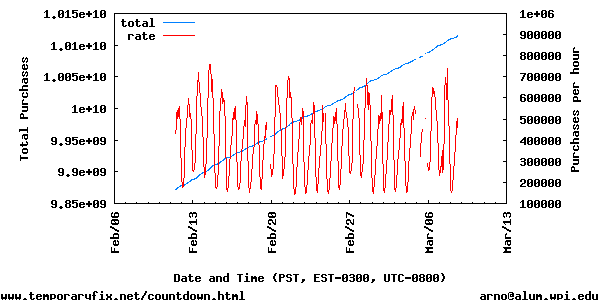 Pre-calculate a few variables necessary for calculating the trend line. The variables (m and b as part of f(x)=m*x+b) are calculated based on the first and last available records. It is necessary to run this before countdown2.gplot in order to achieve (semi-)accurate trend predictions.

The green trend line is estimated using the available datapoints and then tuned using the gnuplot fit command. It approximates, but does not accurately display, the time of the 10 billionth sale. Based on the countdown.inc data, that sale was reached shortly after 14:00 PST. My and others' observations indicate that Apple's counter (another extrapolation) displayed 10 billion around one half-hour before this time. 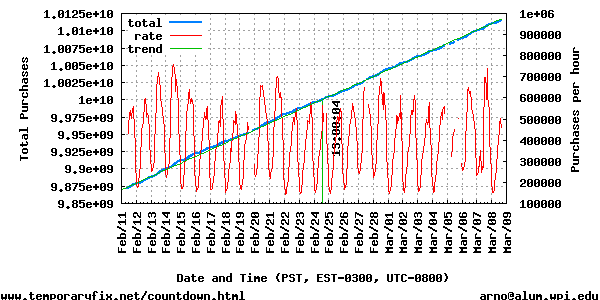